0.8% of neonates are born with congenital heart anomolies. This is usually because of developmental abnormalities which occur in the early weeks of gestation when the heart is being formed.

These range from non-significant abnormalities to conditions which are unable to sustain extrauterine life withouf emergency surgery.

The more common abnormalities are deficiencies in the development of the normallly orientated heart such as secundum Atrial Septal Defect where the atrial septum fails to form properly or Ventricular Septal Defect where ventricular septation is not complete. Failure of the endocardial cushions to develop normally results in atrioventricular abnormalities with pathology varying from primum ASD to inlet VSD with comlpete Atrio-Ventricualr canal defect where the atrioventricular valves are represented by a single atri-ventricular valve spanning the left and right ventricles.Also Failure of the Patent Ductus Arteriosus to close after birth produces Patent Ductus Arteriosus.

Abnormailities of the development of the aorta in the region of the insertion of the patent ductus ateriosus produce coarctation of the aorta. Although this may only present later in life (where the ductus arteiosus has usually closed in intra-uterine life so that collateral arteries form to the lower body before birth) this conditon usulally presents with collapse of the patient associated with acidosis when the ductus arteriosus closes in the first few days of life.

Abnormalities of the septation of the arterial trunk into pulmonary artery and aorta result in truncus arteriosus and aorto-pulmonary window. 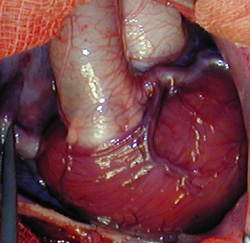